Hammett is a master of matching beats and rhythms. His ability to time the beats, collaborate and compliment fellow musicians has made him highly sought after. "> 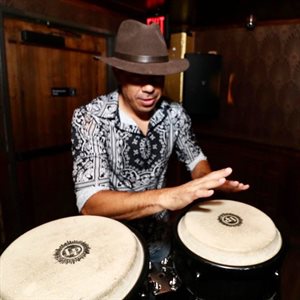 Drummer, percussionist Chris Hammett received his first drum kit at around the age of 11 and has had a passion for music ever since. As a self-taught drummer, it was his love of mimicking beats and R & B music that built the foundation of his playing. From there, watching and listening to other drummers from all genres spanning from funk & alternative to rock has allowed for many opportunities in the house music industry.

Whether on stage or in the studio, Hammett is a master of matching beats and rhythms. His ability to time the beats, collaborate and compliment fellow musicians has made him highly sought after. His inspiration is his late mother #MiaStrong. “Playing it Fwd” and always adapting is what continues to develop his style and versatility as a drummer and musician.

Over the years, Chris' experiences range from performing in bars, nightclubs and restaurants in Las Vegas, Miami, New York City and LA, as well as being a resident drummer at the Palms Casino Resort in Vegas. Chris has played alongside some of the top House Music DJ’s worldwide including : DJ Scotty Boy, Lavelle Dupree, Louie Vega, Roger Sanchez, Doc Martin, DJ Jazzy Jeff, and more.

Hammett’s experience in the music industry has been much more than sitting behind a conga / drum kit. Hammett is a volunteer drummer and musical therapist for www.awalkonwater.com an amazing charity that provides surf therapy for children with autism and down syndrome. Chris has gained invaluable insight into the business and event side of things. Chris understands and appreciates the amount of work it takes to be a successful independent musician.

Currently residing in Southern California, Chris plays regularly at Deep House Brunch DTLA www.deephousebrunchdtla.com , local venues & festivals. He also picks up a variety of gigs along the way. He owns www.hammettime.live entertainment and offers custom drum tracks to producers and musicians from around the world. Hammett is also working on new releases as an independent artist including play-along tracks for house music DJ’s.

Over and beyond music, Hammett is likely spending time with his new rescue pup Obi Maximus, his family, making a strong cup of coffee or traveling...

Chris Hammett will be at the following Events